On Friday, both petrol and diesel prices crossed the Rs 80 mark in Delhi. The prices of petrol and diesel were up by 21 paise and 17 paise, respectively. Diesel was priced at Rs 80.19 a litre, up from Rs 80.02 a litre on Thursday, while petrol increased to Rs 80.13 a litre from Rs 79.92 a litre. This was the third consecutive day that diesel prices were seen above petrol in the city, and the 19th day in a row with no downward price revision. However, the prices of petrol continued to be higher than diesel rates in other metro cities of Kolkata, Mumbai, and Chennai. The prices of petrol and diesel in Kolkata were seen at Rs 81.82 a litre and Rs 75.34 a litre, respectively, while in Mumbai they were Rs 86.91 a litre and Rs 78.51 a litre. In Chennai, petrol was priced at Rs 83.37 a litre and diesel at Rs 77.44 a litre. In the month of June, the price of liquefied petroleum gas (LPG) had also increased by Rs 11.50 a cylinder in Delhi. For the current month, price of a 14.2 kg non-subsidised LPG cylinders was seen at Rs 593 in


The Himachal Pradesh government has approved interest subvention scheme on loan to revive the tourism industry, an official spokesperson said.


This loan period will be for four years with interest subvention of 50 per cent each for the first two years, he added.


The cabinet in its meeting chaired by Chief Minister Jai Ram Thakur on Thursday also gave in principle approval to regularise the services of 6,500 PTA, 3,300 PAT and 97 PARA teachers engaged in various government schools, he added.


The government is set to release the second draft of the proposed e-commerce policy soon, which would focus on domestic traders and have more scrutiny on predatory pricing, multiple people in the know said.


While no decision has been taken on the deadline for the final policy, sources said Department for Promotion of Industry and Internal Trade (DPIIT) Secretary Guruprasad Mohapatra is set to hold a review with his team in the next few days to take stock of the draft policy and submit it to the commerce minister.

Sources add that the DPIIT is planning its own set of recommendations on data localisation and non-personal data, independent of those laid out in the Personal Data Protection Bill 2019. “Data localisation remains a big concern and despite there being broad government norms on the issue, it would have to be tailor fit for the e-commerce sector,” an official said.


Pricing — a prime complaint of domestic retailers — is set to be the focus, with the government considering an annual review of discounts given by e-marketplaces.


Amid the current anti-Chinese sentiment triggered by the Sino-India border tension and talks of an import substitution policy, Chief Economic Advisor Krishnamurthy V Subramanian on Tuesday said shutting the doors to other countries will not help India.


He said the country had followed the import-substitution model till 1991, and that approach has been discredited since.


Speaking at a webinar organised by MCCI, Subramanian said, “India has to compete with other countries and insulating itself from others will not help.”

“Having said that, there are, however, exceptions to this. I will not say that trade should continue with countries which are creating problems at the border,” he clarified.


His comments came after the nationwide clamour for a boycott of Chinese goods is getting louder, following the fierce clash between the troops of India and China in eastern Ladakh that left 20 Indian Army personnel dead.


Subramanian said it is still not certain when demand in the economy will pick up.


“The prevailing uncertainty is purely due to health reasons and it will go probably when the vaccine is available to fight Covid-19,” the chief economic advisor said.


The median mobile download speed from global internet tracker Ookla shows a higher median download speed on mobile and fixed internet than before the lockdown. The data is for the week ended June 14 (chart 4). People use the internet more when they are at home, for work, and for entertainment, leading to a fall in download speeds because of increased load. More people are heading back to work now.


Two indicators which haven’t seen as much of a recovery are traffic congestion and pollution levels. Mumbai and New Delhi both saw their traffic congestion levels begin to taper off after rising in recent times. The numbers are based on location tracker TomTom International (chart 5).


Business Standard also looks at nitrogen dioxide levels that are emitted because of industrial activity and from vehicles. The levels remain muted in Delhi and Mumbai (chart 6, 7). Delhi had shown some recovery but the gap over 2019 show signs of widening again. 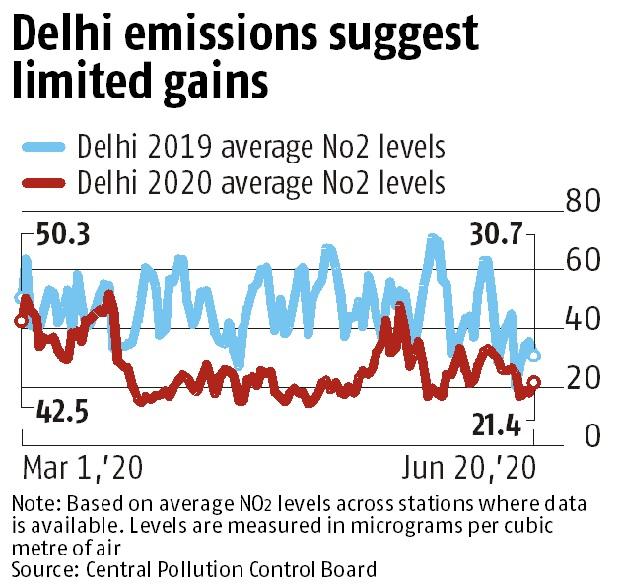 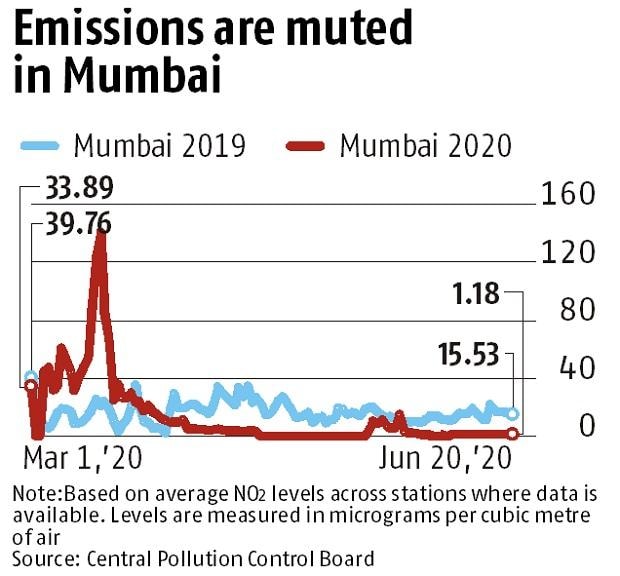 
Calling for a freeze in the creation of new posts, rationalisation of manpower at workshops, shifting outsourced work to CSR, moving ceremonial functions to digital platforms, cutting down on use of stationary by 50 per cent — the railways is gearing up to adopt a slew of austerity measures proposed by its financial commissioner in view of the serious dent in its earnings this year due to the coronavirus crisis.


In a letter dated June 19, the financial commissioner of the railways told the general managers of all the zones that the traffic earnings of the national transporter dropped by 58 per cent at the end of May, as compared to the corresponding period of the previous year.


“There is a need to explore new areas of expenditure control and enhancement of earnings,” the letter said.


It stated that such measures were already announced by the then financial commissioner in 2017 and the Railway Board in 2019.


“As you are aware, the railways has been mandated by the government to meet all of its