Since late 2018, Paras Chopra has enabled people to vicariously grow their own organic vegetables in small parcels on his 55-acre farmland in Gurugram. Now, the seasonal produce from a larger portion of the land is feeding a spurt in demand.


Kosara, the app-based community farming venture that Chopra set up, is now delivering products within a week of registering new subscribers — those who simply want the organic farm produce. Its regular subscribers have their own virtual kitchen gardens, typically 700 sq ft, where vegetables of their choice are grown by local farmers. Kosara charges Rs 3,000 per month for a basket full of produce home-delivered every week, enough to feed a family of four. It caters to customers in Gurugram, Delhi and Noida, with plans to start in Faridabad soon, says Chopra, a former corporate lawyer.


The lockdown-driven surge in demand for organic food is a shot in the arm for community-supported agriculture. “Organic and local go hand in hand,” says Shameek Chakravarty, co-founder of agri-tech start-up Farmizen. The Bengaluru-based firm serves people in the city and Hyderabad. After the lockdown, it has added 5,000 to its existing customer base of 12,000.


This is partly down to supply constraints in the retail sector — not every new customer is looking specifically for organic, chemical-free fruits and vegetables. “As big brands including online players with long supply chains faced uncertainty over delivery, many found us a dependable option,” adds Chakravarty. Farmizen has a network of partner farms in Bengaluru and Hyderabad, going beyond a buy-sell relationship. Unlike big players that focus on customer convenience, as slot-based deliveries would suggest, a start-up like Farmizen operates in a resource-constrained way and works closely with farmers. In a post-Covid-19 scenario, practices such as community-based buying with fixed delivery timings may become a preferred option.


The pandemic has also forced farms that worked with the hospitality industry to turn directly to consumers. Krishi Cress, a farming initiative in Delhi that grows vegetables, edible flowers and microgreens, and makes preserves, took a hit with cafes and restaurants downing shutters. By mid-March, Krishi Cress began to focus on marketing immunity-boosting products to consumers. These include nutrient-rich leafy greens such as kale, Swiss chard and water cress as well as turmeric and kombucha. A delivery boy with a box of greens


Like everyone else, the farm had to struggle with curfew passes and police blockades initially. But the response from customers has been positive, particularly as they are now more conscious of hygiene and are seeking items that do not change hands and are straight out of the farm, says Achintya Anand, founder of Krishi Cress.


The chef-turned-farmer opened Krishi Cress in 2014 and supplied exotic vegetables to top-tier restaurants in the capital. Apart from two farms and a dispatch and packaging unit in Chhatarpur, Krishi Cress has a farm in Faridabad that cultivates ordinary vegetables, also all organic. It also sells products from Darima Farms, which has an artisanal cheese factory near Mukteshwar in Uttarakhand.


Pushing for purity of produce further is hydroponic farming, which is based on alternative soil like coco peat and nutrient-filled water. Kaze Living, a Delhi start-up launched in January, promotes a chemical-free plant-based diet in urban areas. From different varieties of basil, arugula, bok choy, mixed microgreens and herbs to portobellos and tomatoes, most of the plants it sells have living roots that can survive for a week. “Many customers just put the leftover stem and root in a pot and the plant grows back,” says Shruti Jain, one of the co-founders. With a subscription base of 300, Kaze Living promises to deliver the greens from farm to fork within three hours. workers sort vegetables at a partner farm of Farmizen


Yodeli, an organic grocery store that curates and delivers fruits and veggies in Mumbai and Bengaluru, similarly sources produce from farms including ones that practise aquaponic farming. A vegetable box with exotic greens and herbs costs Rs 1,650 and lasts a family about a week. 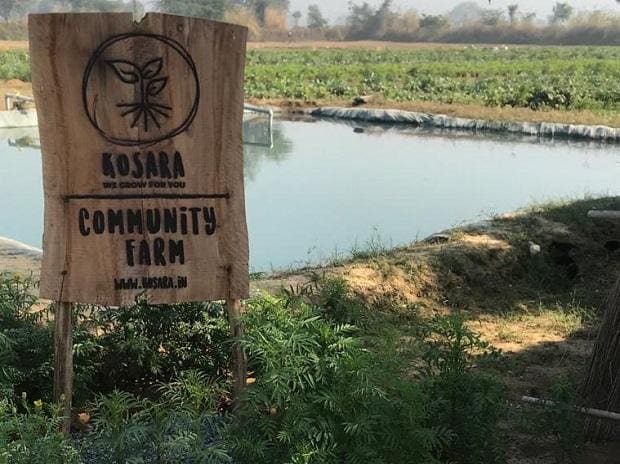 Kosara’s community farm in Gurgaon has over 350 subscribers


In Delhi-NCR, The Altitude Store is delivering to customers from its three outlets in the capital and one in Greater Noida. Although it is well-stocked with fruits and vegetables, it has only chicken in the meat segment. As does popular hormone-free fish and meat supplier

FreshToHome (its chicken gets sold out quickly too). But, says its CEO, Shan Kadavil, “With fresh guidelines set to ease movement of trucks, we should be able to deliver products across categories in a couple of days.” Meanwhile, South Delhi residents can continue to count on the 25-year-old French Farm on NH-8, which provides organic poultry, pork and vegetables to its loyal clientele. Fri Apr 17 , 2020
The income tax department has released refunds amounting to Rs 5,204 crore to 820,000 small businesses, consisting of proprietory firms, trusts and companies, since April 8 to enable them carry out their activities without pay cuts and layoffs due to the situation created by Covid-19. The department will […]