Sweden’s SSAB has withdrawn its initial interest for Tata Steel’s Netherlands business. On November 13, Tata Steel announced that it had started discussions with SSAB for a potential acquisition of its Netherlands business, including Ijmuiden steelworks, and due diligence was expected to be completed by the end of December.


However, Tata Steel confirmed on Friday that SSAB had withdrawn its initial interest, but the company said it was committed to arriving at a strategic resolution for its European portfolio.


In its earnings release, SSAB President and CEO Martin Lindqvist said, “After deeper analysis and discussions, it became clear that there were limited possibilities to integrate IJmuiden into the framework of SSAB’s strategies.”


“We have carefully evaluated Tata Steel IJmuiden and have concluded that an acquisition would be difficult for technical reasons. We cannot be sufficiently certain that we could implement our industrial plan with the preferred technical solutions as quickly as we would wish. We cannot align Tata Steel Ijmuiden with our sustainability strategy in the way desired,” he added.


Shares of Tata Steel fell 3.68 per cent on the BSE following the news.


Tata Steel, however, said the IJmuiden plant was among the most environmentally efficient and cost-competitive steel producers in Europe. 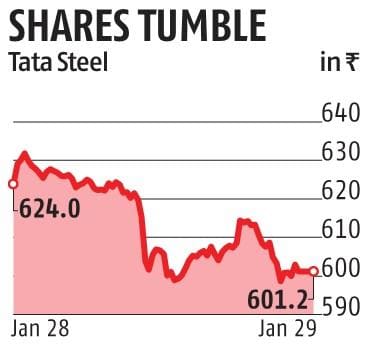 The divestment was meant to reduce Tata Steel’s debt significantly. At the time of announcement of SSAB’s interest in Tata Steel Netherlands, analysts had suggested an enterprise value of $2-$2.5 billion for Ijmuiden. The transaction was expected to bring Tata Steel closer to its target debt to Ebitda (earnings before interest, taxes, depretiation and amortisation) ratio of 3x. Annualised debt to Ebitda for Tata Steel consolidated stood at 3.9x in Q2.


This is not the first time that discussions for a solution to European operations have collapsed. In 2018, Tata Steel had agreed to a 50:50 joint venture with Germany’s Thyssen­krupp, but the European Commission did not approve it. High costs have caused Europe to be a challenging market, and since the 6.2-billion-pound Corus acquisition in 2007, Tata Steel has been reducing its exposure to the market.


In FY16, the geographic composition of Tata Steel was one-third India and two-thirds international, which was now reversed in favour of the profitable side. The capacity in India is about 20 million tonnes now, four times of what it was at the time of Corus acquisition. Europe, during the time, has shrunk from 18 million tonnes to 10 million tonnes.


Tata Steel’s primary steelmaking operations in Europe are Ijmuiden (7 million tonnes), Netherlands, and Port Talbot, UK (3 million tonnes). In changing the geographic mix, Tata Steel has spent Rs 75,000 crore in the last four years in organic growth in Kalinga­nagar and the acquisitions of Bhushan Steel, Usha Martin, and other facilities.


Stronger cashflows from Indian operations have helped the company achieve its target of reducing net debt by a $1 billion every year. In H1FY21, Tata Steel managed to reduce net debt by Rs 8,285 crore by focusing on cost. The SSAB transaction, however, was aimed at accelerating Tata Steel’s deleveraging efforts.