India, according to Knight Frank, ranks 12th and had 5,986 such individuals in 2019, which is likely to reach 10,354 by 2024. The number of billionaires in India, on the other hand, is likely to reach 113 by 2024, up from 104 in 2019. Amongst asset classes, Indian UHNWIs are most aggressive in equity investment with 72 per cent willing to invest in this asset class compared to a global average of 29 per cent.


The survey is based on responses provided during October and November 2019 by 620 private bankers and wealth advisors who manage over $3.3 trillion of wealth for UHNWI clients spread across 200 countries and territories.

North America, according to Knight Frank, dominates the UHNWI landscape, with over double the UHNWI population of Europe.

Asia, on the other hand, is quickly closing the gap on Europe and the realty broking and consulting firm predicts that by 2024, it will be the world’s second-largest wealth hub, with forecast five-year growth of 44 per cent.

“However, even following this heady rise Asia’s UHNWI cohort will still only be half the size of North America’s, which is forecast to grow by 22 per cent over the same period,” the report says.

Over the next five years, Knight Frank expects global UHNWI numbers to grow by 27 per cent to 649,331. Of the top 20 fastest growing countries that they measure, six are located in Asia (led by India with 73 per cent growth), five in Europe (led by Sweden with 47 per cent growth) and three are in Africa (led by Egypt with 66 per cent growth). 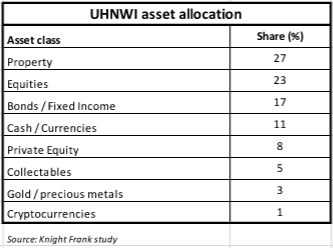 That said, wealth creation in 2020 will be an uphill task, as UHNWIs expect political and economic challenges – including a global economic slowdown, trade wars and political tension – to weigh on their ability to create wealth in 2020.

So, where do these UHNWIs invest? A sizeable chunk – 27 per cent of their portfolio – Knight Frank survey suggests, is comprised of investment in real estate, followed by equity at 23 per cent and bonds & fixed assets at 17 per cent.

“According to our Attitudes Survey, on average 23 per cent of UHNWI investment portfolios are made up of equities, meaning that their performance makes a large contribution to rising wealth. Residential property also accounts for a large proportion of total UHNWI wealth – almost a third, according to the Attitudes Survey,” the survey findings suggest.

Among cities measured on three key metrics – wealth, investment and lifestyle – New York, London, and Paris are the top five cities globally, followed by Hong Kong and Los Angeles. “In the top 20, North America dominates with eight cities, followed by Asia and Europe both with five. From Russia, Moscow is a new entry while Sydney ensures an Australian presence,” the Knight Frank report says.